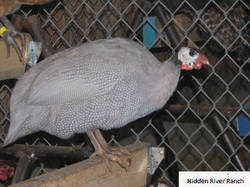 Lavender
The Helmeted Guineafowl is a large (53–58 cm) bird with a round body and small
head. They weigh about 1.3 kg. The body plumage is gray-black spangled with white. They have an unfeathered head, decorated with a dull yellow or reddish bony knob, and red and blue patches of skin. The wings are short and rounded, and the tail is also short. Various sub-species are proposed, differences in appearance being mostly a large variation in shape,
size and colour of the casque and facial wattles.
Guineafowl are particularly well-suited to consuming massive quantities of ticks, which might otherwise spread lyme disease These birds are terrestrial, and prone to run rather than fly when alarmed. Like most gallinaceous birds, they have a short-lived explosive flight and rely on gliding to cover extended distances. Helmeted Guineafowl are great runners, and can walk 10 km and more in a day. They make loud harsh calls when disturbed. Their diet consists of a variety of animal and plant food; seeds, fruits, greens, snails, spiders, worms and insects, frogs, lizards, small snakes and small mammals. Guineafowl are equipped with strong claws and scratch in loose soil for food
much like domestic chickens, although they seldom uproot growing plants in so doing. As with all of the numididae, they have no spurs.
We currently raise Guineas in the following colors: Lavendar, Pearl, Slate, Buff and Buff Dundotte and Pinto